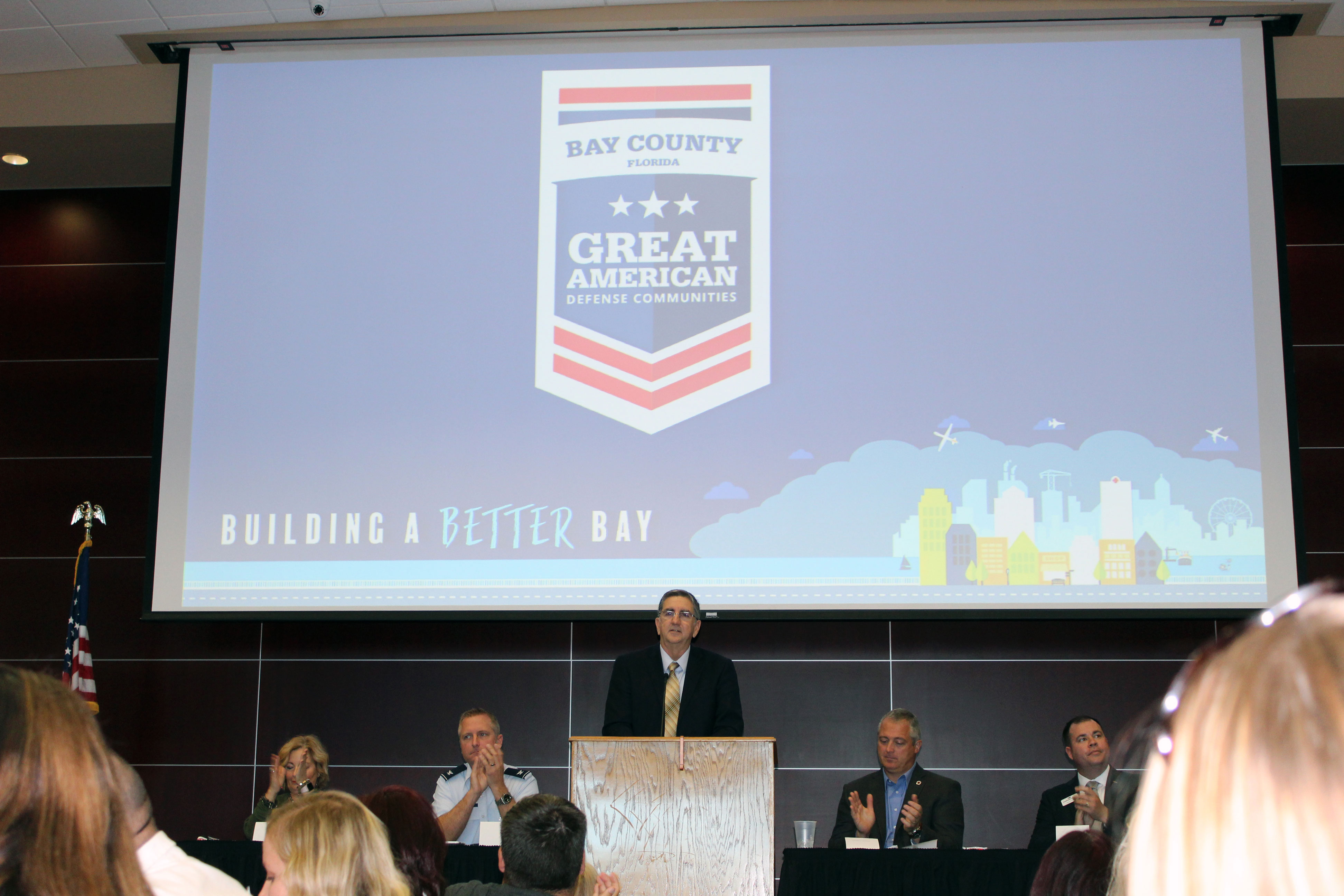 “Defined by a mission of force and family, readiness and resilience, America’s defense communities are the foundation of our military’s strength,” ADC President Bill Parry said. “The communities we recognize through the Great American Defense Communities program represent the best examples of what communities can do to create great places for our military families to live and work. We congratulate these five communities and look forward to sharing your stories with the nation.”

Selected communities are recognized nationally for their exceptional commitment to improve the lives of service members, veterans and their families as a model for all communities. Bay County’s application referenced the long history of support by many community organizations working together as one team. The Bay Defense Alliance, formed in 1993 includes leaders of the area Chambers of Commerce, 300-member Bay County Chamber of Commerce Military Affairs Committee, Economic Development Alliance, Gulf Coast State College, Florida State University, the Board of County Commissioners and others dedicated to supporting Tyndall AFB and Naval Support Activity Panama City.

The application cited many examples of community support, which included trips across the country by 25 local community leaders to help prepare military members for relocation to Bay County in advance of a mission move and referenced the successful “Thanks-A-Million” campaign recently launched by leadership at Gulf Coast State College. Money raised by the campaign is used to help military members and their families attend college by covering costs not included on available federal programs. The campaign reached the million dollar mark so quickly the campaign had to double the goal. Mr. Bill Cramer, Campaign Chairman, noted, “it’s amazing to me that a small amount of money at the right time in someone’s life can make all the difference and to be able to be there and fill that gap at the right time with the right amount of money is just a blessing.”

Carol Roberts, President and CEO of the Bay County Chamber began her career there in 1977 and was among the first to learn of the GADC selection; “We are excited and very proud that Bay County has been selected as a Great American Defense Community and look forward to celebrating with so many people who are truly dedicated to our military community and so richly deserve this honor.”

Defense communities, regions which are home to active military installations, were eligible to apply for the 2019 class of Great American Defense Communities. This year’s selected communities will be honored throughout the year, including at the Defense Communities National Summit in Washington, D.C., in June 2019.

ADC builds resilient communities that support America’s military. We are the connection point for leaders from communities, states, the military and industry on community-military issues and installation management to enhance knowledge, information sharing and best practices. With nearly 300 communities, states, regions, and affiliated industry organizations, ADC represents every major defense community/state in the nation. For more information, visit defensecommunities.org and follow us on Twitter (@defensecomm) or Facebook.

Founded in 1922 by a group of military officers, USAA is among the leading providers of insurance, banking and investment and retirement solutions to 13 million members of the U.S. military, veterans who have honorably served and their families. Headquartered in San Antonio, TX, USAA has offices in seven U.S. cities and three overseas locations and employs more than 35,000 people worldwide. Each year, the company contributes to national and local nonprofits in support of military families and communities where employees live and work. For more information about USAA, follow us on Facebook or Twitter (@USAA), or visit usaa.com.