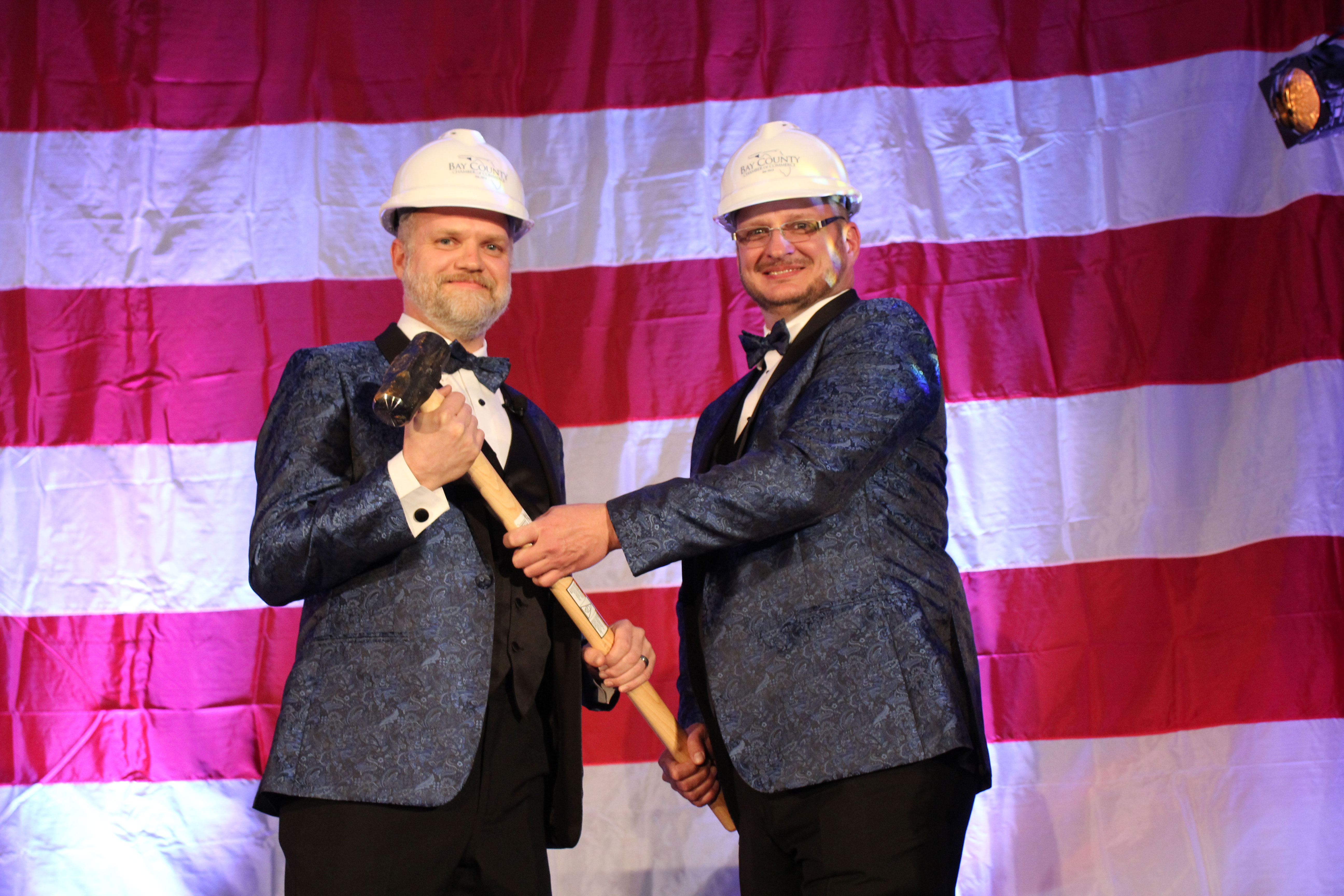 “The Annual Dinner and Awards Ceremony is our chance to reflect on all of the accomplishments from the previous year,” said Roberts. “From the winning of the federal courthouse to winning multiple communication awards, and even surviving Hurricane Michael, there are many reasons to celebrate.”

The event began at 5:30 p.m. with a social and silent auction benefiting Junior Leadership Bay (JLB), a program of the Bay County Chamber of Commerce. JLB prepares Bay County’s youth and future business leaders to meet the challenges facing our area through hands-on activities and exciting discussions involving community leaders and motivational speakers.

The event continued at 7:00 p.m. with the main event, where nearly 775 community leaders and numerous elected officials gathered to celebrate the Chamber’s successes of 2018 and to honor the outgoing Chair of the Board, Doug Moore of The Panhandle Group. Franklin Harrison, Founding Partner at Hand Arendall Harrison Sale, served as the Master of Ceremonies for the evening.

Moore passed the gavel to 2019 Chair, Will Cramer of Bill Cramer Chevrolet Cadillac Buick GMC. In his closing remarks, Moore stated he never thought he would be addressing a crowd of this size as an outgoing Chair of the Bay County Chamber Board of Directors when he first arrived to Bay County nine years ago.

“Thank you for welcoming and accepting me and allowing me to serve,” said Moore. “I am certainly proof that if you show a willingness to help, Bay County will welcome you with open arms.”

Moore’s term as chairman included many successes such as – ensuring legislation that safeguarded bed tax money from use on infrastructure; reducing the Business Rent Tax; ensuring the Panama City Federal Court House stayed in Bay County; working with several cities and the county to secure the services of NextSite, LLC to promote areas on the east side of the County for redevelopment; and last but not least, working at the Bay County Emergency Operations Center during Hurricane Michael as the Liaison Officer.

Also being honored at this event was the outgoing Military Affairs Committee (MAC) Chair, Claire Sherman of Lamar Advertising. Sherman was the 2017 Chair of the Board of Directors before becoming the 2018 MAC Chairman. Sherman officially passed the gavel to Doug Moore who took over as the 2019 MAC Chairman on Tuesday, January 17th at the MAC Passing of the Gavel. During the event, Sherman commended the work of the local military installations of Bay County, stating had it not been for them, there would be no reason for her to serve as MAC Chair.

“Our local military are the ones to be commended for their service for our country,” said Sherman. “Both of our military installations play a vital role not only economically, but also through their individual community involvement and the impact of spouses on our workforce. We appreciate you!”

Each year the Chamber recognizes an outstanding member with its Member of the Year award. Bob Majka, County Manager of Bay County, was announced as the 2018 recipient. Doug Moore, 2018 Chair of the Bay County Board of Directors, introduced Majka as the recipient stating he was top of mind from the very beginning.

“From our first conversation, this person stood out as a shining star,” said Moore. “Over the last several years, I have watched [Majka] in numerous situations, some rather controversial and others more placid. [His] temperament and treatment of those around him rarely changes and he is always focused on doing what is best for the community.”

Majka has been involved in many projects aimed at bettering the community, including presenting the solution to save the federal courthouse in Panama City, being involved in the community’s partnership with NextSite for the benefit of both new and existing businesses in Bay County, as well as working to maintain the County’s fiscal discipline.

The Chairman’s Award, of which has only been awarded on five other occasions, is given only when the Chair of the Board of Directors feels there is someone (or group) that has been especially impactful in a way that is outside the realm of normal operations of impacts in our community. Stan Connally, Executive Vice President of Operations at Southern Company (formally Gulf Power), was announced as the 2018 recipient of the award. Doug Moore, 2018 Chair of the Bay County Board of Directors, introduced Connally as the recipient, stating he did not waste any time exhibiting visionary skills in assessing the potential of our region and paving the way towards making Bay County a growing, thriving competitive hub for business development.

“Connally has worked tirelessly with local legislative delegation, as well as community and business leaders, to identify and eliminate barriers,” said Moore. “Serving on a number of boards in various leadership capacities, including being one of the first appointees to the Triumph Board, Stan and his teams have developed programs that have made northwest Florida a leader for site selection in the country, and programs focused on revitalizing the commercial corridors of our communities.”

The last award of the night was the Lauren Merriam Memorial Award, the Chamber’s highest honor. Glen McDonald (who was the 2011 recipient of the award), presented the 2018 award to Joey Ginn, who was chosen for this award for his heart and love for all that is Bay County. He has served on multiple boards, including Chair of the Bay County Chamber of Commerce Board of Directors, Economic Development Alliance, United Way and American Red Cross to name a few. Despite holding a number of serious positions, McDonald said Ginn was chosen for his sense of humor, a trait considered in earnest each year when a recipient is selected.

“Joey and his wife, Michelle, form a dynamic duo in our community and sets the real estate world on fire,” said McDonald. “They are truly a Bay County couple, and family, that everyone can be proud of.”

Wrapping the evening up, 2019 Chairman, Will Cramer gave his vision for the organization over the next year. Cramer touched on the aggressive priorities for 2019, stating key objectives for the year include business restoration and retention; commercial development; business continuity and disaster planning; all while continuing to support military, work force, educational, medical, housing, tourism, planning and infrastructure improvements.

“We have a once in a lifetime opportunity to revitalize and refresh our community, not only for ourselves, but also to affect those who want to invest in our area and grow with us,” said Cramer. “Our phones are ringing every day with calls from individuals, realtors and developers looking for opportunities here.”

Cramer ended the evening inviting attendees to stand together with optimism and enthusiasm stating, “Together, we will build a better Bay!” The “Build a better Bay” campaign is being utilized to emphasize the need to continue efforts to redevelop our beautiful community. A surprise performance of dancers, presented by Toni Bense of Tonie’s Dance Workshop, wrapped the evening up in a festive and lively way.

About the Lauren Merriam Award

The Lauren Merriam Memorial Award is presented annually by the Bay County Chamber of Commerce to a member of the Bay County business community who best exemplifies the characteristics embodied by Lauren Merriam, a Past President of the Chamber in 1959 and the original Chairman of the Chamber’s First Friday Club. Most importantly among those characteristics are commitment to the community’s well-being, as exemplified by involvement in civic, charitable and/or endeavors contributing to the betterment of Bay County and the benefit of its citizens — and the ability not to take oneself, or one’s peers, too seriously. Merriam did a lot for our community and in the process, he enjoyed himself.

Thank you to our sponsors!