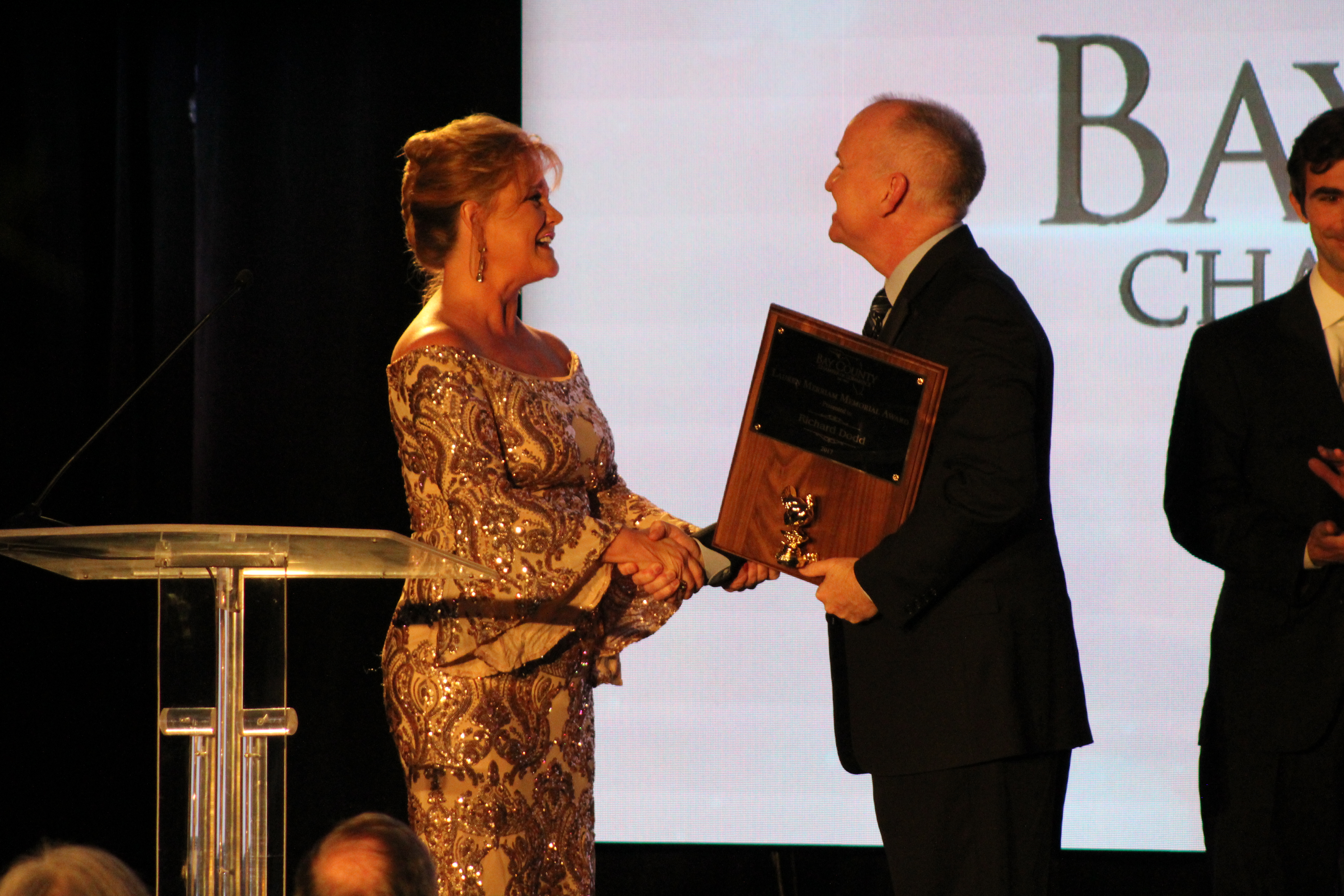 The Bay County Chamber of Commerce held its 2018 Annual Dinner and Awards Ceremony January 19, 2018 at Edgewater Beach and Golf Resort. The event began at 5:30 p.m. with a social and silent auction benefiting Junior Leadership Bay (JLB). JLB is a program founded by the Leadership Bay Class of 2000 for high school juniors. It prepares Bay County’s youth and future business leaders to meet the challenges facing our area through hands-on activities and exciting discussions involving community leaders and motivational speakers.

The event continued at 7:00 p.m. with the main event, where nearly 700 community leaders and numerous elected officials, including Senator George Gainer and  Representatives Jay Trumbull and Brad Drake, gathered to celebrate the Chamber’s successes of 2017 and to honor the outgoing Chairman of the Board, Claire Sherman of Lamar Advertising. Former Speaker of the House, Allan Bense, served as the Master of Ceremonies for the evening.

Sherman passed the gavel to 2017 Chairman, Doug Moore of The Panhandle Group. Sherman’s term as chairman included many successes such as – getting local individuals appointed to the Federal Judicial Nominating Committee; getting the Chief Judge of the Northwest Florida District of the Federal Court System to rescind her decision to close the Panama City Federal Court House; winning three communications awards from the Florida Association of Chamber Professionals, celebrating the Bay County Chamber’s President/CEO, Carol Roberts’, 40th anniversary with the Chamber.

Also being honored at the annual dinner was the outgoing Military Affairs Committee (MAC) Chairman, Robert Carroll. Carroll was the 2016 Chairman of the Board of Directors before becoming the 2017 MAC Chairman. Carroll officially passed the gavel to Claire Sherman who took over as the 2018 MAC Chairman on Tuesday, January 9th at the MAC Passing of the Gavel Event.

Each year the Chamber recognizes an outstanding member with its Member of the Year award. This year, two individuals were announced as the 2017 recipients: Waylon Thompson of Manuel & Thompson P.A. and Doug Smith of Burke, Blue, Hutchison, Walters & Smith. Throughout 2017, Thompson and Smith went above and beyond the call of duty, serving as the Co-Chairs of the Federal Court House Task Force. Through their efforts, significant strides were made in the effort to keep the Federal Courthouse in Panama City.

The Chairman’s Award, of which has only been awarded on four other occasions, was given to two deserving individuals. Glen McDonald of Gulf Coast State College and  Tom Neubauer of ERA Neubauer Real Estate were presented the award for their efforts in making Tyndall Air Force Base the preferred alternative for the Predator B MQ-9 Reaper Mission.

The last award of the night was the Lauren Merriam Memorial Award, the Chamber’s highest honor. Leon Walters (who was the 2015 recipient of the award), presented the 2017 award to Richard Dodd, who was chosen for this award for his commitment to the community’s well-being, as exemplified by involvement in civic, charitable and/or endeavors contributing to the betterment of Bay County and the benefit of its citizens. Recipients of the award are selected by the previous award winners.

Wrapping the evening up, 2018 Chairman, Doug Moore gave his vision for the organization over the next year. Moore touched on the aggressive priorities for 2018, stating more focus will be made on urban planning, educational opportunities with Bay District Schools, and partnering with the Bay Defense Alliance to prepare the community for the influx and impact that the MQ-9 Reaper Mission could have on Bay County. Moore ended the annual dinner inviting attendees to join us in the greatest show on earth while helping us “build a better Bay.” The “Build a better Bay” campaign is being utilized to emphasize the need to continue efforts to redevelop our beautiful community. A surprise performance of Aerial Dancers wrapped the evening up in a festive and lively way.